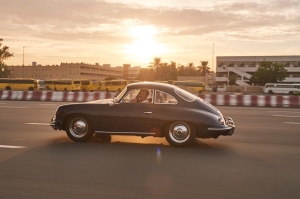 The 356 rocks, I lent it to a friend recently for a drive up Jebel Jais and we got some stunning photos. However, it was bit sick before that drive and really spluttering after.

Since then we’ve tried everything to get it running well – a local garage and the boys at home. We felt it was overfueling, so messed with pumps and fuel pressure. We reset, tuned and even changed carbs, but it just wouldn’t run right.

Resigned to an engine out and full inspection, whilst waiting on a recommended garage in Abu Dhabi (who never got back to me) a chance message from Rob at 1000 Dunes saw me drop it into there. He’d messaged as he had a lovely Outlaw 356 Coupe and a stock 356B convertible in the garage and though the three would make a good photo. I should have dropped it to him weeks ago.

That afternoon, he called me with a lesson – on dual carb VW’s or Porsches, valve clearances first, then ignition, then carbs. A lesson I won’t forget. A friend Howard had said it would be something simple, he also reminded me he had said check the valves… he still reminds me…

I’m on a plane to the US at the moment, but once back I’m hoping to pick it up singing like a bird – after all I have a buyer or two lined up!

After a year of driving it around I noticed the tacho and the fuel/temp gauges are switched over – genius, another little job, now done. I also worked out why the smell after filling up, even the occasional drip into the cabin. It turns out the breather hose was never refitted after the restoration, also now done.