I was born in 1971, I guess I was therefore a certain age at a certain time. As a teenager growing up in Bedfordshire it wasn’t far to visit Santa Pod, so I found myself at the Bug Jam, not Bug Jam 2 not Bug Jam 27 that scarily happened this year, the first, the original Bug Jam in ’87. Of course it was just a day out back then and who knew it’d last, but equally who knew it would spark a light that still burns to this day.

It could have been that visit, or my older sister’s boyfriend’s Jeans Beetle, maybe a friend’s purple candy painted ducktailed bug, or a mate’s brother’s cool Porsche beetle that was rumoured to have been a Wolfrace show car. Whatever it was, excuse the pun but I caught the bug!

At 16 my first car was an orange ’71 1300 cc bog standard beetle – ENV395K if I remember correctly and the same age as me. Naturally, being the 80’s it ended up a poor executed home-made example of the Cal-look, dechromed and resplendent in wedgewood blue and peppermint green. Sadly it didn’t survive into the 90’s, someone driving into the side of it and writing it off, but the seed was sewn and whilst I next went for the blue oval and a Mk1 XR2, I always hankered after a cool VW.

25 years later or there abouts I found one, a ’67 Karmann Ghia Coupe for sale in Dubai. I convinced my wife to come for a look, but went it died on a test drive, we literally parked that idea. But that wasn’t the end, some six months later the seller called me up and told me it was sorted and was I still interested – silly question 🙂 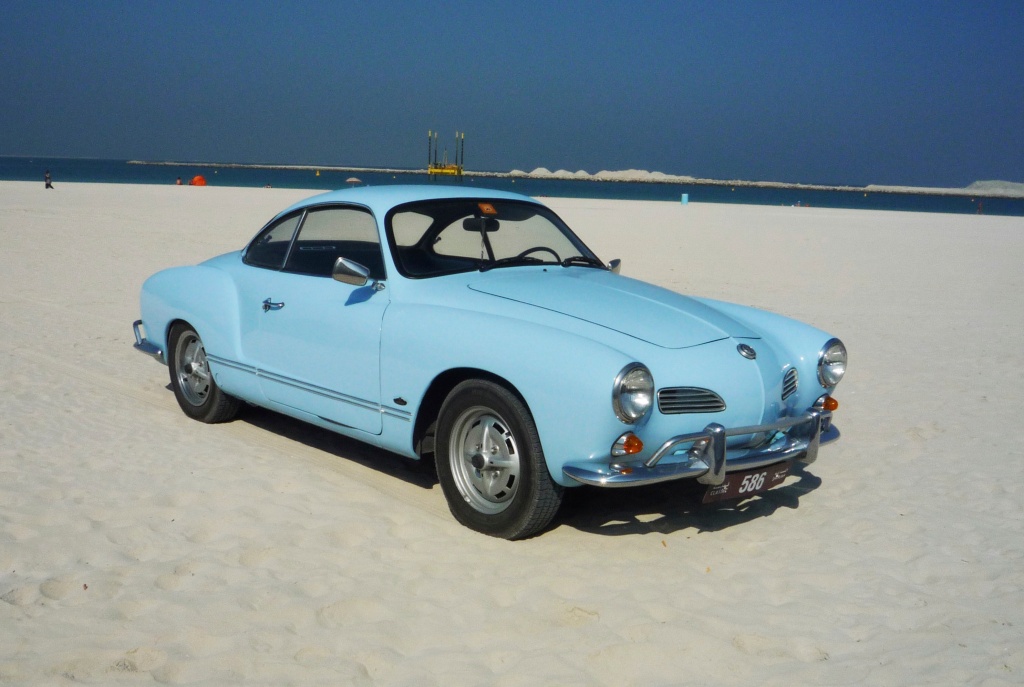 Now, you’ll see a theme developing here – never content with a working car or bike the first thing I did was to plan some modifications. The summers in Dubai are particularly cruel and no sane person would drive a non-AC car. This therefore gave me a window for a few tweaks, to sort this out before I registered it.

So it needs AC, everyone knows that saps power, so given the 1500cc engine was a little tired it seemed like a good idea to upgrade the engine at the same time. Did I say upgrade, I meant get a brand new one, 2 litre and 140hp felt about right.

So here it is, a custom built CB Performance 2005cc engine imported from the States and a Gilmore AC unit… 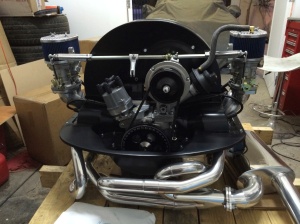 Now these things take some time to deliver and the devil makes work for idle hands, so I stripped the interior out and ordered new seat covers and carpet set from TMI. I must say the fit-out went smoothly and I’m happy with the kit, although some of the glue wasn’t up to the Dubai heat.

A little adaptation of the carpeting on the kick panels allowed for some speakers and a custom box behind the back seat should provide the power.

AC, Engine and a re-wire.

How hard can it be… four bolts for the engine and tranny, not a lot of wires and a fitting kit and pictoral walkthrough for the purpose made AC kit.

Clearly a lot more complicated than I thought, especially if you follow a friend’s recommendation and use a ‘Porsche Specialist’ in Sharjah who can’t follow instructions in English or be bothered to look at pictures.

What a disaster, the basic crate engine was of course simple, the AC kit a nightmare. Badly fitted/located, hardly braced, the bodged installation was a shocker. Best part was I had an oil cooler to fit as the new engine would pick up some heat. They mounted it pretty much in the middle of the car underneath the condensor, about an inch off the ground – ready for the first speed bump!

Let’s not start on the wiring… I took the car back, moaned online and got a call from Ben at AAA in Rashidiya saying he could have a look at fixing it…

…Which they did, brilliantly. They fabricated some adjustable mounts for the compressor, re-did the wiring, made a gauge pod, etc etc.

What they returned was a great little car, with some oomph. The AC itself wasn’t awesome, but it worked and the car was really fun to drive. It was one of those cars that kept you smiling, with too much power for the brakes, suspension and steering. It made a lovely noise and squatted nicely when you were heavy with the right foot.

Wheels and suspension were next on the list and maybe a white roof, this car was to be a keeper which I’d tweak over time, but then came the career move to the US.

I had about 3 months notice on a relocation to Dallas, Texas, so set about making arrangements for shipping the car (and my Lotus). The car was a Californian import so I didn’t imagine I’d have any issues – but then I found the old Salvage Cert tucked away in its extensive history file!

Try as I might I couldn’t get it approved. They simply will not accept the return of a car that is exported on a salvage title. The clock was ticking so sadly I sold it.

I believe it went to a good home, well the new owner turned up in a 997 GT3 RS and was taking it back to its motherland. UPDATE – I’ve seen a picture of it recently, still Dubai registered and being looked after – with some nice chromed Fuchs and discs.

One thought on “1967 Volkswagen Karmann Ghia” Leave a comment ›