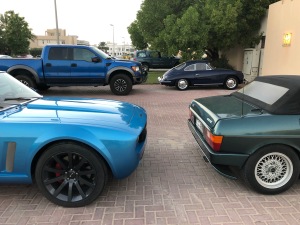 Running too low, we suffered too much tyre rub when it squatted, so a new poly bush kit from Pedders, for the 300C SRT8 of course, freshened things up, but it was still grounding despite full adjustment – more to do with the track on the car and the arches to be honest. So, we’ve raised it up – it doesn’t look right visually in the arches, it used to follow the curves perfectly, but hey it works now. I may lower it as tad, but it is pretty major work to do so, so will run it like this for a while.

We’ve worked on sound and vibe proofing, and also re-dressed the boot cover. As a stop gap we’d just carpeted over the hatch with some really nasty exhibition carpet. The sun killed that in a few months, which gave us the nudge to line it with vinyl and also make it so it can be opened.

Windows – they never really worked, the 300C mechanisms not working with the angles, I guess we should have kept the Jensen ones, but too late for that. The solution was more modifications and some H3 Hummer regulators, they have a single arm so can be aligned better and miraculously fitted in the door without needing shortening. Next issue was the switches, the struggling motors over-powered the front switches with the auto function so we’ve wired them to the back switches – yes, there aren’t any rear side windows, these were a hangover from the 300C four door donor. A bit of a bodge, but again it works for now. One day I may address this, but it’d involve a lot – remodeling the custom leather covered armrest etc.

Then we went to the sound – it sounded amazing at full chat, but unbearable in traffic and at slow speeds, far too loud, massive resonance and you just felt a bit stupid! Daniel fabricated some resonators and cut them into the existing exhaust. A neat bit of work with a square profile that didn’t affect ride height. The car has a flat floor, so there’s little space to tuck them away. These have made the world of difference.

What’s next, enjoy the car and over to me to sort the ICE. By changing the window regulators to single arm we managed to claim back enough space to sit some door speakers. So, with six speakers now and the whole car a little quieter we should get some decent sounds, or at least be able to hear the radio. I just need to sort the aerial, I’ve been using Apple Car play, and also sort the wiring, it’s not on a switched live yet so needs to be powered on and off which is a pain. I’ve got a kit to get the steering wheel buttons linked in too, but that’s a job of another day…

I really do need to get it out and about and shoot some pics away from the driveway!

'71 Jensen SRT, General, In the garage