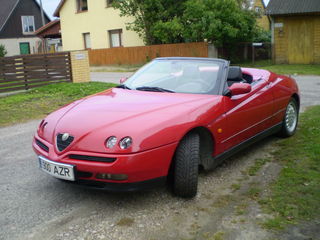 The buying my old cars concept clearly wasn’t working and with the divorce I was clearly having a crisis, so what better for a broke ‘crisee’ a cheap drop-top Italian. A £5k company loan saw me pick up what would become a famous (well a little bit) red spider. A recurring theme, I loved this car, but then had an accident.

Bear with me on this one as its good and I’ve learnt to embellish it over the years. Picture the scene, M25 near Watford, sadly winter so not top down and wind in my hair, but a nice drive all the same. The traffic in front concertinas. I’m in the outside lane, quick reaction, slam on the anchors and pull up with distance to spare. The car behind me sadly didn’t have my reaction time, tried to switch to the middle lane but smacked into the back of me, spinning me and him and blocking two lanes of the M25.

As I was fine I went to see the other driver – young guy, face full of airbag but okay – his german registered Smart Roadster a bit of a mess. I didn’t recognise him at the time, but pretty much everyone would now – a young GP2 racer at the time, now 4 times F1 World Champion Lewis Hamilton.

Yes, I later sold the story The Sun, but I made sure it was a favourable article wishing him luck in the forthcoming British GP, come to think of it they still owe me some cash for that.

Anyway it was eventually repaired, insurance took forever and like all highly-strung Italians it didn’t like sitting around whilst it was repaired, so returned with a few gremlins and I sold it on.